The Student Physical Privacy Act is a response from anti-GBT groups Child Protection League Action PAC [CPLAction PAC] and the Minnesota Family Council [MNFC] would be the first time that a bill would define sex based on “physical condition of being male or female, which is genetically determined by a person’s chromosomes and is identified at birth by a person’s anatomy.” 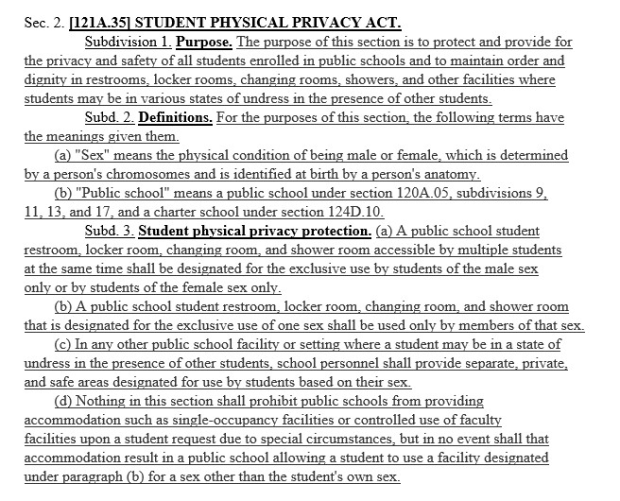 The bill was pushed forward to “protect and provide for the privacy and safety of all students enrolled in public schools and to maintain order and dignity in restrooms, locker rooms, changing rooms, showers, and other facilities where students may be in various states of undress in the presence of other students.”
The bill proposes coding into law the following:

The St. Paul Public School Board will pass a comprehensive Gender Inclusion Policy on March 17th and in an email blast to it’s supporters, the CPLAction PAC highlighted the MSHSL Transgender Athletic Policy and Minneapolis’ Gender Identity Policy passed in 2014 by stating, “St. Paul Schools will vote to adopt almost an identical “gender inclusive” policy by redefining the meaning of “gender” to nothing more than a “social construct [constructing your own reality] …attached to femininity or masculinity.” In other words, DNA and science is wrong and there is no longer such a thing as two sexes: male and female. There is only the condition of being masculine or feminine according to how you feel.”

The bill is an unprecedented move on the part of the Minnesota Republicans as it would violate the 1993 Minnesota Human Rights Act, Title IX, and would undoubtedly be found unconstitutional by the US Supreme Court. It would be the first time that a person would be legally defined by their anatomical body parts as assigned by a doctor at birth and negate the science behind being transgender.

I reached out to OutFront Minnesota and Executive Director Monica Meyer stated, “OutFront Minnesota believes that all students deserve to be treated with dignity and respect. No one should be discriminated against because of who they are. That’s why we strongly opposes Minnesota Senate File 1543. This bill would single out transgender youth and permanently deny them the ability to take part in their school’s activities, and use the facilities. It would take away local control from schools who want to be safe, supportive and inclusive.”

I also reached out to Michelle Lentz from the CPLAction PAC via email and received the following response, “We believe this legislation provides the protection that all students deserve. It allows schools to address with compassion and sensitivity the needs of a student in special circumstances where special accommodations may be needed, while at the same time addressing the needs of all students to have their privacy respected.”

CPLAction is a registered Political Action Committee in the state of Minnesota with a registration PAC number of 41127 and according to the Registration form on file with the state of Minnesota, the designation of PAC is included in their name, therefore I will continue to use the designation of a Political Action Committee when refering to this organization.

Once again, it appears that the party of small government has decided to reach into our personal lives to legislate biology and genetics through interpretive law as opposed to the actual science behind sex and gender. This bill is nothing more than an appeasement to the anti-LGBT groups putting pressure on state legislators and is expected to fail. This would hand the CPLAction PAC their fourth defeat in two years in their attempts to segregate the LGBT community from the what they believe is “normal society.”

Editor’s note: This article is an updated version of one published at CNN’s iReport. It has been updated to include comments from Michele Lentz, spokesperson for CPLAction