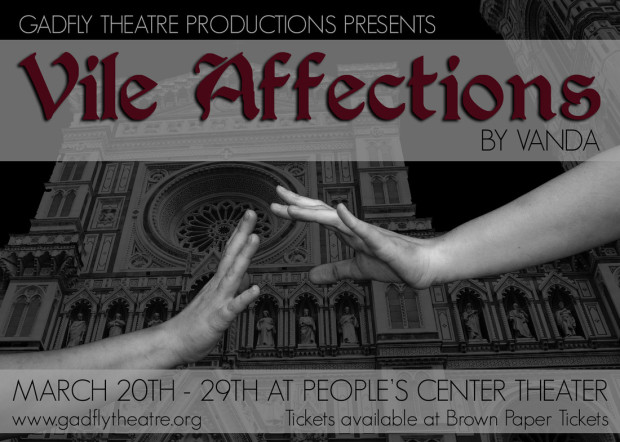 Gadfly Theatre Productions, a queer and feminist theater company in the Twin Cities, is presenting Vile Affections, a play about the first recorded lesbian affair.

Set in post-Renaissance Italy, Vile Affections is the story surrounding Mother Benedetta Carlini, her spiritual visions, and her treatment within the Catholic Church.

“The piece aims to juxtapose Christianity and mysticism and look at sexuality through the lens of the Catholic church,” Gadfly said in a statement. “The show presents a commentary on how the Catholic church has treated women throughout history and how powerful women are dealt with when they hold too much. Gadfly Theatre Productions has been waiting for the right time to debut this play, and with the recent and progressive changes in the Church, a perfect opportunity has presented itself.”

Written by Vanda, Vile Affections follows the story of Carlini in the 17th Century. The playbill description reads:

In a time period when people are newly confronted with Galileo’s ideas of a sun-centered universe, a nun reveals herself to have visions of God. The Sisters of her convent express a curious allegiance to her. In fear of her growing power, the church sends a Provost to find the truth. What he ultimately finds challenges his understanding of the world to his very core.

Vile Affections unearths the first recorded lesbian affair and the intense inquisition of all parties involved. It ultimately presents a commentary on how the Catholic church has treated women throughout history and how powerful women are dealt with when they hold too much.

Vile Affections will run from March 20-29 at People’s Center Theater. Here are show dates and times:

Tickets can be purchased online at Brown Paper Tickets.