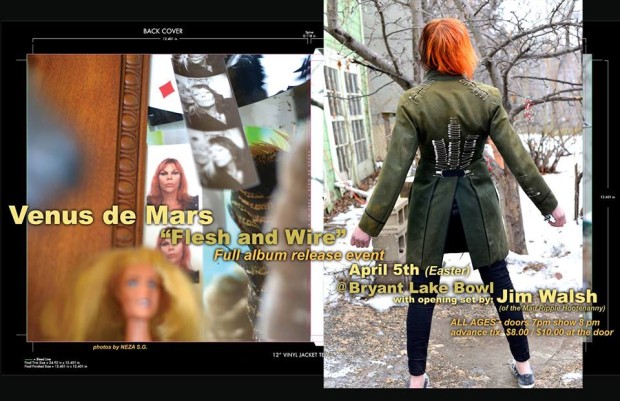 Transgender artist Venus de Mars has launched a pressing and pre-sale campaign, as well as launch party for her upcoming acoustic album Flesh and Wire. Best known as the lead for All the Pretty Horses, de Mars is also a multidisciplinary artist in music, painting, drawing, film, and performance art.

According to an Indiegogo page launched to help fans support the new album, it has some interesting tracks and cameos:

We brought in a few guest musicians who added to a number of the songs: Amanda Standalone came in and contributed violin and dobro onsite, Joel Bremer contributed violin through Stockholm’s Debka Studio (Johan Syrén), Emily Dantuma contributed cello onsite, and finally, YES: Laura Jane Grace from “Against Me!” contributed harmony vocals which are featured on the full album’s very special pre-release 12″ 45 vinyl single “Take My Shoulder.” The vinyl 12″ 45 also includes a “B” side with 2 additional songs, both covers: my acoustic version of David Bowie’s “5 Years,” and my acoustic version of “Love Hurts,” which the 70’s band Nazareth made famous, but which was also previously performed by the Everly Brothers.
Flesh and Wire was produced by Barb Morrison, who has also worked with Blondie and Rufus Wainwright. The track recordings were done at Sacred Heart Studio in Duluth.

To find out more about the new album, visit Indiegogo.

On April 5th, Flesh and Wire will have a release party at Bryant Lake Bowl. Jim Walsh of Mad Ripple Hootenanny will do an opening set. For more information, visit Facebook.