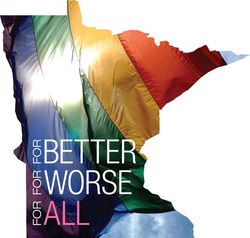 When Republicans retook the Minnesota House in November it sparked a conversation about Minnesota’s rural-urban divide. The party, candidates, and especially outside groups spent large amounts of money convincing rural Minnesota voters that DFL candidates cared more about Twin Cities issues than rural concerns. Gay marriage — and safe schools for LGBT students to a lesser degree — were a major part of that argument.

“The last two years had been a Democrat majority that really was Minneapolis- and St. Paul-centric and was forgetting the rest of the state,” the Capitol’s new top Republican, Speaker Kurt Daudt, said the day after the election. Rep. Jeff Backer, R-Browns Valley, won his race in part by dubbing his DFL opponent, Jay McNamar of Elbow Lake, “Metro Jay” for McNamar’s vote for same-sex marriage.
From the plans for a taxpayer-funded new office building for state senators in St. Paul, to cultural hot buttons like the 2013 vote to legalize gay marriage or the ongoing effort to bring the Affordable Care Act to the state, Republican candidates in many of the state’s furthest reaches capitalized on unease that big-city Democrats were inflicting their values on small towns while hoarding the spoils of the state treasury.

(The other theme of Condon’s report, that rural Minnesota is in decay, is one some researchers dismissed as harmful. “Not only does this doom-and-gloom narrative not match the facts, it is hurting our ability to focus on the actual issues in our small towns,” wrote the Center for Small Towns at the University of Minnesota-Morris in reaction to the Star Tribune piece).

Republicans have been successful at stoking a Greater Minnesota vs. Twin Cities divide. At the same time, some progressives continue to paint rural voters as close-minded rubes. At Left.mn, contributor Steve Timmer wrote:

Perhaps among the reasons that rural parts of the state are unattractive to some people to live or do business in, my Greater Minnesota friends, is that so many of you spend so much time sitting in lawn chairs, dressed in camo, and complaining about gay marriage, while you polish your guns. Just a thought.

This situation is not unique to Minnesota either. North Dakota is considering a bill that would ban discrimination based on sexual orientation and gender identity (something Minnesota did more than 20 years ago). The bill’s author, Sen. Carolyn Nelson, D-Fargo, played up that rural-urban divide in an interview with the Grand Forks Herald:

“The reason I think that this bill is important is that I think that the young people are looking at not only getting a good job but moving to communities that are accepting,” Nelson said. “Despite the fact that Fargo and Grand Forks are pretty liberal and above board, there are a lot of places in North Dakota that are not yet there.”

That’s a pretty remarkable quote…. She may find, however, that insulting the 75% of North Dakotans who don’t live in Grand Forks or Fargo may not have been the best approach to getting this bill passed.
Apparently, according to Nelson, the reason this bill is important is that all you dumb hicks out in the western half of the state are not liberal enough and so you’re “not yet there.” We hayseeds here on the farms and in the small towns of the eastern half of the state are equally suspect. It is only in our cosmopolitan strongholds of Grand Forks and Fargo that we have “communities that are accepting” and people who are sufficiently “there.”

That’s not quite what Sen. Nelson said. More importantly, Kerian is hardly a voice of reason on the issue of LGBT rights, and might have some motivation to exploit the rural-urban cultural divide to score points on this policy proposal; he sits on the board of directors of the Focus on the Family-affiliated North Dakota Family Alliance, a group that has expended an enormous amount of energy making sure a nondiscrimination law protecting LGBT residents and visitors is tanked every year. That affiliation is not identified.

Both sides seem to be under the impression that there are few to no rural LGBT people, or that somehow supporting LGBT equity is an urbane, sophisticated position, instead of one of common sense and based of a tradition of fairness. Rural DFLers contributed to equality in Minnesota when they all voted in support of an LGBT-inclusive anti-bullying bill. On marriage equality, rural DFLers and a handful of Republicans from Greater Minnesota voted against banning same-sex marriage and in support of marriage equality.

That’s not to say that there aren’t challenges to being LGBT outside of the urban core. Conservative religion plays the largest part in divisions in rural Minnesota. There’s also the flight of LGBT people to urban areas, not always because rural areas are unfriendly (but sometimes they certainly are), but because many seek friendship, love, and support in community. Community for a minority can be difficult in smaller towns or rural communities especially for a minority that makes up a very small percentage of the population.

About the same time I read Timmer’s and Kerian’s diametrically opposed polemics, I came across an interesting news item. In “Raise the Flag High: Queer Farming in Rural America,” Modern Farmer contributor Lori Rotenberk provided some important context to the issue of LGBT equity and the rural-urban divide.

The piece features LGBT farmers, including those in rural Iowa and northern Wisconsin. Many chose to move from the urban core to small towns and farming communities. For the most part, these farmers get along well with their fellow rural residents.

It’s not just LGBT farmers either. From Pine City to Brainerd to Marshall, LGBT communities are organizing. Pride picnics, social events, and political campaigns are more common. Transgender, gay and lesbian candidates have run for office in Greater Minnesota in recent years. A gay Republican represented Crow Wing County in the Minnesota Senate not long ago.

Stereotyping rural voters as rubes does nothing to make life better for rural LGBT people. It only serves to create division and reinforce prejudices. Casting urban voters as out-of-touch liberals who don’t care about rural issues is equally disingenuous. Many hail from rural communities and care about the future of the communities in which they were raised.