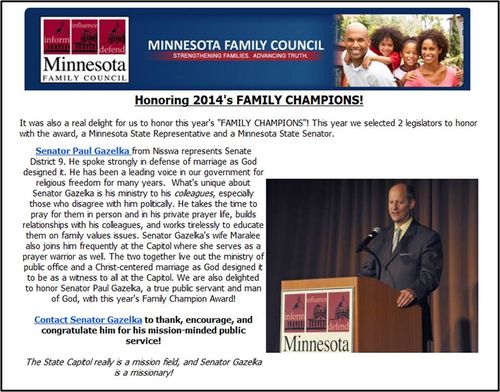 Some Bluestem readers might consider the headline above Mike O’Rourke’s legislative session overview in the Brainerd Dispatch, 2015 Session: New perspectives may surface at Legislature, a bit misleading, since the perspectives expressed by Senator Paul Gazelka (R-Cass County) and Representative-elect Dale Lueck (R-Aitkin) about LGBT issues are nothing new.

Gazelka, for instance, came to his senate seat in 2010 by challenging the only openly gay Republican state legislator in Minnesota, then winning the primary that followed.

In the Brainerd Dispatch article, the Cass County Republican objects to the new trans-inclusive policy adopted by the Minnesota State High School League and Lueck concurs:

“I felt it was unfair to girls playing sports to have a male player on their team and potentially be in their locker room,” Gazelka said.

Lueck said that although the Legislature doesn’t directly oversee that panel it’s an issue that could eventually wind up before senators and representatives.

“If they keep monkeying around in that area … If you irritate enough people … it doesn’t matter who has oversight,” Lueck said. “We don’t need to go down that road. That’s really getting close to the line when you … school boards have to decide ‘Are we going to have to create a big bathroom for a third category of individual?’ If they keep it up it will end up in the Legislature.”

Once again, there’s that bathroom obsession on part of cultural and social conservatives. For more on the new policy, check out the Star Tribune’s coverage in High School League overwhelmingly approves transgender policy.

Gazelka said he will see if he can find bipartisan support for a Freedom of Conscience Act that would allow businesses to not participate in the celebration of a gay marriage if they chose not to do so. This could include counselors or Christian colleges that allow on-site weddings.

“I think we should allow people to follow their consciences,” he said.

Once again, a Republican is hoping to weaken or repeal inclusion of LGBT people under Minnesota’s equal protection law–long in place–under the notion than equal accommodation now hurts the religious liberty of those who don’t like the new marriage law.

Photo: Paul Gazelka receiving an award from the Minnesota Family Council, via Facebook.