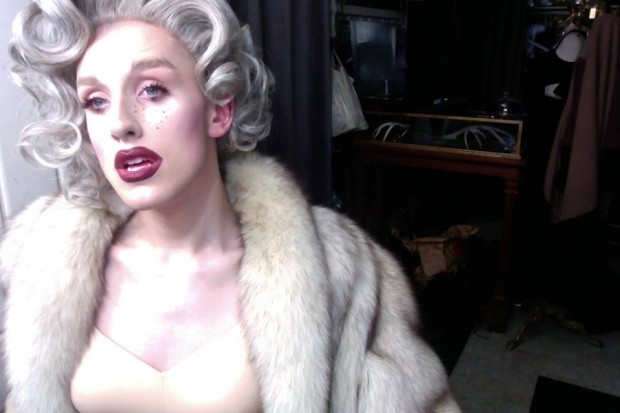 Minneapolis fashionista Max Malanaphy will be a contestant on RuPaul’s Drag Race Season 7 which debuts in January.

Malanaphy has been a part of Minneapolis’ fashion and theater scene, and performs as a drag queen under the same name. Here’s a glimpse at what the internet has to say about Minneapolis’ newest Drag Race contestant.

Malanaphy is from New Hampshire. He lived in Hudson, Wis. and attended Hudson High School, then moved to Minneapolis.

Malanaphy starred in a stage production of Beauty and the Beast in 2011, which his grandmother filmed and put on Youtube. Malanaphy performed as Frank N Furter in the MCTC production of Rocky Horror in spring 2012. He played the lead in Cabaret at Anoka’s Lyric Arts Main Street Stage in summer 2012, and he was an ensemble performer in Bloomington Civic Theater’s Singing in the Rain last year.

While in Hudson, the 18-year old Malanaphy was a fashionista. The Pioneer Press caught up with him and friend Tess at Macy’s Glamorama in 2010:

Better than prom: Best friends Max Malanaphy and Tess Babbitt, 18-year-olds from Hudson, Wis., long have been creating their own costumes. But before heading off to college, they took to the red carpet in vintage finds they embellished with handmade flowers, studs and spikes from Michael’s. The inspiration: Dior Couture Spring 2010. “There was a floral theme,” Malanaphy recalled.

In addition, Mill City Men has a fashion spread of Malanaphy by Michael Dodes where he’s modeling androgynous and “boy drag.”

The first mentions of Malanaphy as a drag star came about in 2013 when he performed at Envision, a well-established fashion event in the Twin Cities

Before, in between, and after the runway shows, Public Functionary hosted a “V.I.P.” room, open to all ticket holders. It featured live art-making by Minneapolis-based artist-on-the-verge Jesse Draxler; live music collaborations from a fresh-faced crew known as thestand4rd, whose members include internet phenomenon and St. Paul’s own Spooky Black; DJ sets from Sarah White and Adora Tokyo; improvisational dance from performers face-painted by Minneapolis photographer Travis Chantar; lip-sync performances by rising local drag glamazon Max Malanaphy; and a silent auction that included a couple of Draxler paintings (which are sure to skyrocket in value over the next few years); proceeds from the fashion show and silent auction will go to benefit the gallery.

Malanaphy most recently performed at Hotrocity’s launch party (an online store specializing in women’s accessories and apparel, designed and manufactured in the Land of Lakes).

News of Malanaphy’s spot on Drag Race was announced Sunday evening. He follows two other Minneapolis competitors on the show: Bebe Zahara Benet who won Season 1, and Manila Luzon who came in second on Season 3.

Much of Malanaphy’s drag career has been chronicled at the Max Collective on Instagram:

Here’s Malanaphy’s video from Logo announcing his addition to season 7: