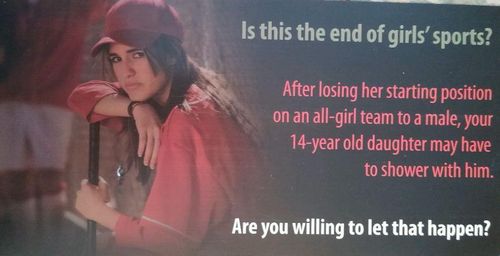 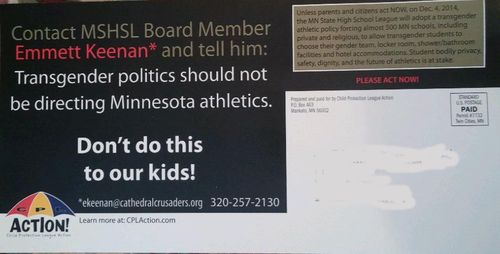 The full-page newspaper ad that the Child Protection League (CPL) took out in the Star Tribune, Duluth News Tribune, Mankato Free Press, St. Cloud Times and the Winona Daily News is not the only medium that the conservative anti-LGBT group is using to frighten Minnesotans about young transgender athletes.

The CPL’s campaign aims to derail a policy that the Minnesota State High School League has proposed for compliance with a U.S. Department of Education update to Title IX.

A source in the Little Falls area gave us the heads up about the mailer, but had not kept the oversize postcard the household secured. Via Facebook, we crowdsourced a request for a copy and received this version of the card, which was received by a household in St. Cloud.

The Column’s Andy Birkey also informs us that the postcard has been sent to households in the Mankato area.

It’s clear that the CPL and its anti-LGBT allies are spending a great deal of money on this campaign.

A source in Little Falls tells us that the full-page ad was also published on Sunday in the Morrison County Record, a weekly newspaper owned by ECM Publishers.

The conservative group that’s opposed to the Minnesota State High School League’s proposed policy for transgender athletes has pulled another full-page ad out of the “say what?” file.

The MSHSL proposed policy is meant to comply with a U.S. Department of Education update to Title IX requirements, which say the civil rights law extends to all students, regardless of sexual orientation or gender identity.

The League shied away from a decision earlier this year after the Child Protection League claimed it would result in boys taking showers with women.