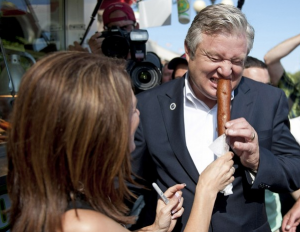 In a candid interview on religious right radio program, Olive Tree Ministries on AM 980 KKMS, Marcus Bachmann claimed the public, the media, and the Left misunderstand his clinic’s work with gays and lesbians who want to be straight. Bachmann even went to lengths to try to rewrite history, denying he’s made condemning statements about the LGBT community.

Bachmann spoke with host Jill Martin Rische on Saturday and his defense of conversion therapy for gays and lesbians was flagged by People for the American Way’s Right Wing Watch.

Martin Rische sets up the interview by portraying the Bachmanns, Marcus and his wife Rep. Michele Bachmann, as victims of a smear campaign. Bachmann even suggests that negative portrayals of his clinic are payback by “the Left” for his wife’s championing an anti-gay marriage amendment.

Martin Rische: You and your wife, Congresswoman Michele Bachmann have really been out there in the crosshairs when it comes to criticism for your personal beliefs. Can you tell me a little about what you have been through, what it’s been like to be so much in the public eye and to really take some pretty hard hits?

Bachmann: First I would say its been an honor, a privilege, to be in a position to serve. I think that is the greatest calling that we have is to be in a position to be a servant leader. I certainly think that exemplifies my wife and I didn’t’ marry a quiet, shy girl. She is known to be strong in her convictions and the good news is I always think, is what Michele says she will do, she will accomplish and she will not do double talk or change her mind. You can count on her for what she stands for but I think that along with our Christian counseling agency, there’s a price to pay and I think in this culture especially, and if I can just say in the last few years it seems like it’s been been revving up the change in our culture where, of course, years ago you would understand among most agencies that — counseling agencies — that you’re pro-life, pro-marriage, pro-family and now, standing up for that cause, that has become controversial. I keep nodding my head thinking, ‘How is a Christian counseling agency as being pro-life, pro-family, pro marriage controversial?’ I do think it’s been intertwined and my wife taking a stand and being the author in the Minnesota State Senate for the marriage amendment — marriage between a man and a woman — promoting that pro-life, pro-marriage stand in Congress and it’s as if that was the unforgivable sin from the Left. I think it’s been misconstrued. I think our agency has been unfortunately…there have been myths made up that we are people that coerce and pressure and manipulate people. It’s the last thing we would do. We are people of ethics. People will choose, they will ultimately choose what they will do with their life. I do think its a responsibility of ours whether we’re a politician or whether we are a professional counselor is to speak truth.

Martin Rische: So none comes in there and is battered by scripture, you know, the Bible’s not used as any kind of weapon. They come in there to talk and you work through things with them. It’s their choice to be there. It’s their choice how things proceed in the counseling session, so this is not having anything to do with coercion and yet that is what is being presented in the media

Bachmann: Well the interesting thing is, I really believe that there have been a number of people of faith that have come into our clinic and have battled with all sorts of issues but some in particular with with same-sex attraction. Once the far-left understood that we were actually creating a safe place, a place where people who said I have this issue with same-sex attraction, this desire. I’m a believer, I’m a person of faith and it’s conflicting with my values systems. Anyone who would walk alongside and then encourage that person’s values systems and their beliefs and bring that in alignment, that is like blasphemous to the other side.

Bachmann: How dare you even consider being involved in someone who has decided or is desiring that to influence in any way shape or form another side of the book on this one?

Bachmann then attempts to re-write history.

Bachmann: I have to say this, Jill. I was on a national radio program and I spoke the first half on parenting but I talked about parents who do not discipline or hold standards or set goals for their children, children like that become like barbarians and we went to commercial break…

Bachmann: Yes, it’s true. I think I could use maybe a better word but regardless, the second half the radio program they talked to me about sex education and the schools, in the public school system, and I talked — nothing controversial that I said. Well, later on, they put together these clips and they said that I called homosexuals barbarians

Bachmann: I would never do that. That is the furthest thing that I would call a homosexual. Then the myths started to happen, that we pray away the gay, that we are fanatical people that do not give people choices and that we are a dangerous place and that whole thing… so kind of like you can’t un-ring the bell but there’s a price to pay.

Bachmann, in fact, did compare “homosexuals” to barbarians in a 2011 interview with Point of View radio, a religious right radio program. Bachmann was actually talking about what Christain parents should say to children who think they might be LGBT.

Bachmann: We have to understand: barbarians need to be educated. They need to be disciplined. Just because someone feels it or thinks it doesn’t mean that we are supposed to go down that road. That’s what is called the sinful nature. We have a responsibility as parents and as authority figures not to encourage such thoughts and feelings from moving into the action steps…
And let’s face it: what is our culture, what is our public education system doing today? They are giving full, wide-open doors to children, not only giving encouragement to think it but to encourage action steps. That’s why when we understand what truly is the percentage of homosexuals in this country, it is small. But by these open doors, I can see and we are experiencing, that it is starting to increase.

Martin Rische and Bachmann continued their conversation about Bachmann as a victim.

Martin Rische: They perceive you as a threat?
Bachmann: We are a threat
Martin Rische: You are a strong threat to what they are promoting which is that there is no choice.

Martin Rische: The thing that really bothers me is the perception that is put out there that you don’t care about the individual or somehow you are anti-gay men, gay woman. No! Every life is valuable. Every life is valuable. People choose to live it a certain way and we may be anti-that lifestyle but we are not anti-that human being. That is not what Christianity is about. We are taught to love people and to be kind and patient and help

We’ve been talking about the whole war-type scenario that you have been facing due to your prominence in the media this whole crosshairs kind of thing that’s been going on and you have actually had face-to face contact with some of these people who are not really happy with what you are doing, so would you tell us a little about what’s going on there?

Bachmann: Sure, well I think it is a part of paying the price, unfortunately. I think its also part of the myths that are out there, the untruths about who we are. If people don’t understand and believe the lie, whether it’s as a counseling agency or whether it’s about my wife Congresswoman Michele Bachmann, we have had so many people say, ‘Why do you hate a certain segment of the population?’ or ‘Why are you such hateful people or you are responsible for the killing of so many people and suicides because they don’t believe the way you do’ and ‘you are such a judgmental…’ You know? It just goes on and on and on.

My word back to them is that you misunderstood. You don’t know who we are. The fact is when it comes to a caring and a loving perspective, that’s what is at the anchor of who we are and what we do, but there is, Jill, a price to pay whether it’s been people coming to demonstrate at our clinic. Whether it’s the thousands of phone calls that have come in believing that screaming and swearing is some kind of a way to change us or effect us. To be honest with you, whether it’s those that have come to our home and have spray painted our home or thrown garbage or nasty packages and so on so forth, that doesn’t slow us down. What it does is say what we are doing is the right thing and there is a conviction I have and I say this without any sound of pride, but in great humility. We are about to serve and we need to continue to serve and if there is a cost to it of course that would be understood but at the same time that’s why i appreciate being on a program like this being able to say what is the truth, who are we what is this all about.

Bachmann and Martin Rische then wondered what America would be like if Christians were militant:

Martin Rische: Can you imagine if Christins would become militant? How long do you think that would be tolerated in our country if Christians were militant?
Bachmann: I think you’d see it on the front pages of most of the newspapers. It would not be tolerated.