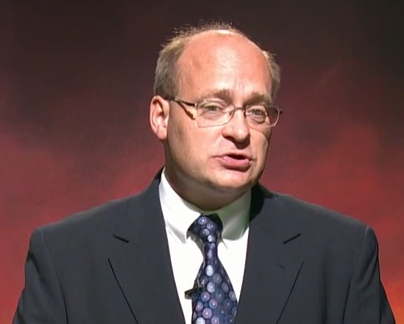 Backer wrote the statement in a letter to the Morris Sun Tribune, in which he stated that “my top priorities of reinvigorating entrepreneurship, funding for senior care, transportation (excluding light rail), and education.”

But on his personal Facebook page, he’s being asked more pointed questions by “JackandGwen Whitley.” According the Republican Party of Minnesota’s website, Jack Whitley is chair of the Big Stone County Republicans.

Backer’s responses suggest that the young College Republican was right to be worried.

JackandGwen Whitley has posted, “Do you want to see liberalism destroyed?, which suggests that the local county chair is so not into urging him to work with Governor Mark Dayton, but to “destroy” him.

According to news accounts published on Friday, Dayton is seeking cooperation:

“If we work together, we can continue to build a better Minnesota,” Dayton said.

Whitley asks for more specific action that the mere destruction of liberalism. He’s also trolling Backer about how whether social issues will go the top of his list.

Backer’s answer suggests that he will indeed put the budren of moral “repair” at the top of his list.

On his own Facebook page, Whitley’s no slouch about sharing his positions and priorities. His cover photo, for instance, is a quote by Cary Gorton, the pastor who was the Sioux City Journal’s “Newsmaker of the Year” for his 2010 efforts to vote out the three Iowa Supreme Court justices who joined the court;s unanimous decision legalizing gay marriage in the state.

Here are the screenshots of the exchanges on Backer’s personal page: 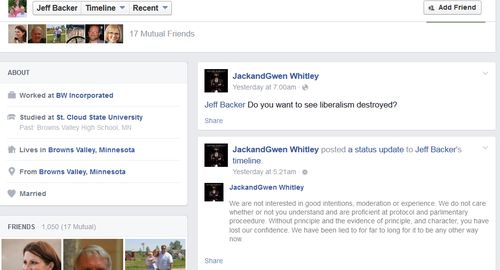 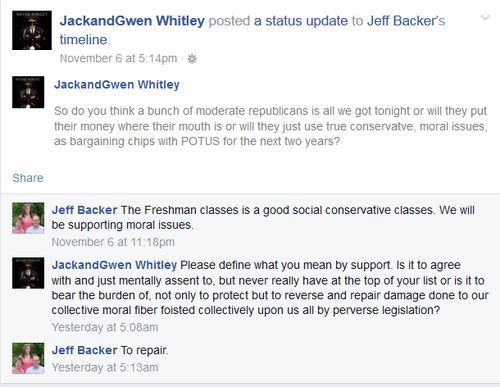