RuPaul’s Drag Race: Battle of the Seasons headed to Minneapolis 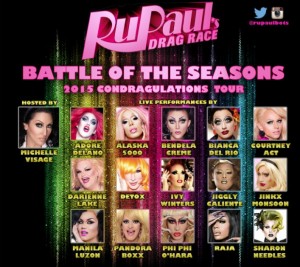 RuPaul’s Drag Race Battle of the Seasons will return to Minneapolis in early 2015 with a new line-up at a new venue.

Accompanying the drag queens will be Cary NoKey, fronted by Rob Fusari aka 8-bit, a a Grammy-winning producer and songwriter for artists such as Beyonce, Will Smith, Whitney Houston and Lady Gaga.
NewNowNext described a bit about Cary NoKey and the group’s latest work:

Director Faron Salisbury says he worked with 8bit to create a video that’s both transgressive and iconically American. The “American Dream” video features appearances by trans actresses Trace Lysette, Dina Marie, Victoria Beltran and Bailey Jay.
“When 8bit, and I first sat down to discuss the concept for the video, we talked a lot about gender roles and how people perceive him as an artist,” says Sailsbury. “He wanted to have a girl play him as a child, and I loved the idea.”
The director says he suggested extending the theme and having trans women play his “mothers” in flashbacks. “I wanted to tell a story about a boy and his mom, without typical gender constraints, and to showcase these actresses in a maternal way.”

One response to “RuPaul’s Drag Race: Battle of the Seasons headed to Minneapolis”