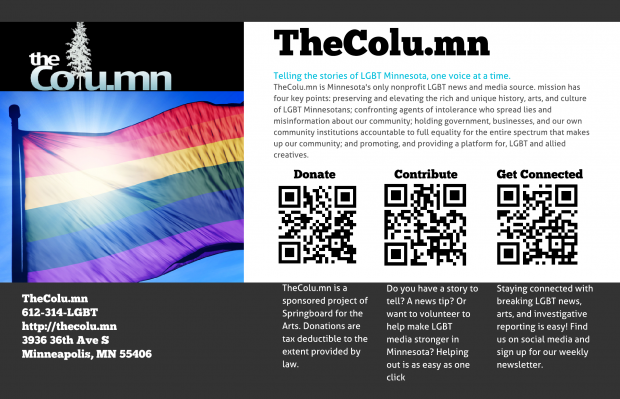 TheColu.mn is holding a two-week pledge drive between Oct. 20 and Nov. 2 to raise funds to add new writers to our team. If just 300 people gave $10, we could easily reach our goal. Consider a donation today!

In early September, TheColu.mn staff, volunteers, and members of the arts community gathered at the Schmidt Artist Lofts in St. Paul for the first event since our launch as a non-profit in January 2014. A great crowd was treated to visual arts, theatre, live music, and poetry as TheColu.mn unveiled our four-point plan to provide high-quality LGBT journalism, and advance the common good of the LGBTQ community and our allies. The following presentation was shown at that event, and today — as a part of our pledge drive — we are sharing it with you.

Since becoming Minnesota’s only nonprofit LGBT media organization in January, TheColu.mn has made an impact on politics, art, and culture in Minnesota: We published 396 articles in the first half of the year; we were syndicated 29 times by larger publishers in the first half of 2014; and web traffic has skyrocketed 1093 percent between January and October. That increase in visibility has also meant the need for increased capacity. We’ve had to purchase more server space with additional security. We’ve also added four new writers in recent months, and are launching a series of arts-related media projects early next year.

As we continue to grow, we are looking to the community for support. Between Oct. 20 and Nov. 2, we are looking to raise $3,000 to keep our organization running strong and add a health writer to cover HIV and other health disparities facing LGBT Minnesotans, and an arts writer to deepen our ability to cover all the diverse creativity happening in our community.

We hope that the in the last 9 months, TheColu.mn has demonstrated its commitment and value to the community. Here are some of the achievements we are most proud of:

Our coverage of the Minnesota State High School League’s proposed trans* inclusive athletics policy — and the transphobic ad a religious right group placed in the Star Tribune — was picked up by national media including Cosmopolitan Magazine, The Advocate, Salon, The Huffington Post, City Pages, MinnPost, Buzzfeed and many more.

We successfully uncovered a plot by evangelical group Trinity Works to infiltrate Twin Cities Pride, and that investigative reporting warned the community about the group’s efforts to convert turn vulnerable members of the LGBT community away from “the lifestyle” and into its brand of conservative Christianity.

TheColu.mn’s reporting on religious right groups promoting false information about the safe schools bill and the LGBT community was picked up by interest groups such as OutFront Minnesota, which were able to alert members about those groups activities.

We also told the story of 21-year old Joel Larson who was killed in an anti-LGBT hate crime in Loring Park in 1991. Friends and family had been holding a fundraiser to create a memorial for Joel, and within days of our report on Joel, the fundraiser exceeded its goal.

TheColu.mn has promoted 17 emerging artists and provided information about 143 LGBT arts events. We also hosted an arts showcase in September.

With your support, we can continue to expose agents of intolerance, promote our community’s rich culture and history, hold community institutions accountable, and elevate LGBT arts and artists!

TheColu.mn Staff, Board of Advisors, Volunteers, and Contributors