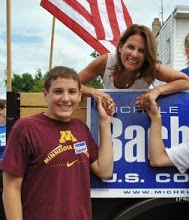 It looks like Nathan Schmid is exactly what he says he is in his letter to the editors of the Morris Sun Tribune: a Republican activist.

There’s 2012’s Romney Testimonies: Former Mitt Skeptic Nathan Schmid (a skeptic because he felt Romney “simply not conservative enough”) and his blog Conservative Student in a Liberal World, complete with a photo of the author with Congresswoman Bachmann and Schmid illustrating the blogger profile.

Schmid writes in Backer does not have priorities straight:

As a conservative who has been actively involved with the Republican Party of Minnesota for years, I simply cannot support Jeff Backer for State Representative. Unfortunately, he does not have his priorities straight, something I saw firsthand at the Republican endorsing convention this past March.

As Backer proclaimed that he would proudly author or co-author a bill to repeal same-sex marriage in Minnesota as one of his first legislative actions, it became apparent that his priorities were not in line with the primary concerns of the district – job growth, investment in agriculture, and improved education.

Backer’s opposition to gay marriage isn’t particularly concerning – the majority of Republicans oppose it. What is concerning, however, is that he intends to try and repeal this well-established law, spending time and energy that should be used addressing more critical issues.

Although I certainly don’t agree with Representative Jay McNamar’s stance on every issue, his legislative priorities are nevertheless a good reflection of the district’s most pressing concerns. McNamar is the best choice in this race, and he deserves to be sent back to St. Paul to represent House District 12A.

The race between retired teacher and wrestling coach Jay McNamar (DFL-Elbow Lake) and “Istanbul” Jeff Backer for Minnesota House District 12A is considered one of the tightest Minnesota House races in the state.

Photo: McNamar supporter Nathan Schmid with Michelle Bachmann. We are not making this up.