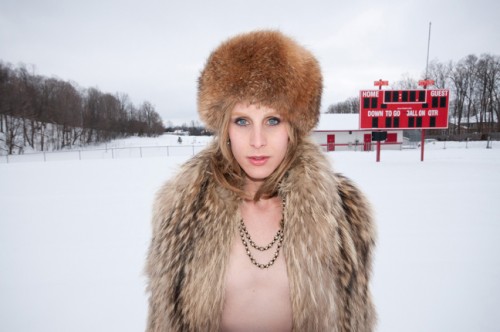 St. Olaf College’s Flaten Art Museum is hosting an exhibit by transgender artist Zachary Drucker and is bringing the artist to the Northfield liberal arts college for a series of talks in October.

She “breaks down the way we think about gender, sexuality and seeing,” St. Olaf’s Flaten Art Museum’s description of the exhibit reads. “Through photography and video, Drucker and her collaborators put queer consciousness front and center, giving voice to a long-silenced trans community. This exhibition brings together three of Drucker’s most recent collaborations and prompts viewers – regardless of their gender and sexual identity – to ask how gender is performed.”

Drucker’s work, and relationship with her partner who is also transgender, were featured in the New York Times earlier this year. Drucker, an actor as well as artist, will be in the upcoming Amazon original series Transparent, starring Jeffrey Tambor of Arrested Development fame, and Judith Light of 80s sitcom Growing Pains. The series follows Tambor’s character who is in the process of transitioning.

On October 8, Drucker will lead a discussion with St. Olaf faculty “on how to fully welcome transgender folks into the workplace, classroom and community.”

On October 9, Drucker will give a talk titled, Kicking Holes in the Darkness, which will be open to the public.