Was Dan Severson running for Minnesota Secretary of State in 2010–as he is in 2014–or to be God’s own non-stick cookware?

Just months before he declared his candidacy in October 2009, self-proclaimed prophet and New Apostolic Reformation leader Cindy Jacobs delivered “prophetic words” at the Deborah Company Midwest Convocation in Bloomington on Saturday, July 25, 2009, promising the Minnesota Republican that he could “to be able to say outrageous things and still have favor. I’m going to give you favor – I’m going to make you Teflon.”

While Severson said outrageous things about the separation of church and state in 2010, apparently God had moved on to using ceramic coatings, since the former state legislator lost the 2010 election to incumbent secretary of state Mark Ritchie, who is not seeking a third term in 2014.

Here’s the passage about Dan Severson (and his wife Cathy Jo, who has in the past been active in chaplaincy and prayer movements at the state capitol) that posted on the Call to the Wall website section on Prophetic Words Reports and Articles in Cindy Jacobs – Deborah Company (July 25, 2009):

The Lord says to you man & woman of God.

The Lord says that you are called to this state for such a time as this. It has been really hard but God says I will make your forehead like flint.

God says I will put my words in your mouth – because Dan I have called you like Jeremiah – I have called you from your mother’s womb. You were given the name Daniel for this day and this hour. And the Lord says I’m going to open up a Cyrus who is going to begin to open up funding. You will be a voice for the unborn. I call you to be a father to the unborn children, says the Lord.

While it’s unclears from the post that the Seversons were in the audience, some of the textual clues suggest that they might have been. First, Jacobs speaks of them by their first names, and the site editor Karen Krueger has added their last name in parenthesis. Earlier in the intercession, Jacobs mentions Michele Bachmann, but uses the congresswoman’s full name.

Bluestem contacted General International by phone to ask Jacobs if she recalled if the couple were present at the meeting in 2009, but learned that Jacobs was traveling in Asia. Emails to Krueger and the Severson campaign asking if the couple were in the audience in Bloomington were not returned.

Ordinarily, Bluestem would not raise the nature of a candidate’s religious experience, but Severson himself has in the past questioned the notion of separation of church and state.

In short, he made it an issue for voters.

Who is Cindy Jacobs?

The Encyclopedia of American Loons breathlessly catalogues some of Jacobs’ more outlandish claims in its post about the Texas Dominionist leader:

. . . To give an impression of how Jacobs thinks the world hangs together, here is Jacobs claiming that the lands of Texas are cursed with violence because they were previously inhabited by Native Americans who “did blood sacrifice” and “were cannibals and they ate people.” Fortunately Rick Perry’s The Response prayer rally in Houston broke the curse and “the land is starting to rejoice, you see, because of that prayer” (here is a more in-depth explanation of the kind of phenomenon she has in mind). Later she demanded that those with American/Indigenous heritage must renounce and repent for their ancestor’s sins, since that’s the kind of person she is. In Jacobs’s world God also sent prophets to Germany before the war to warn the Jewish population of the Holocaust, implying that if they didn’t manage to escape it must have been because they were unwilling to listen.

She has also plead the government to ban abortions because it “curses the land”. You want proof? In 2011 there were a couple of cases of large flocks of birds dying in some US states. Jacobs immediately perceived the reason: the repeal of “don’t ask, don’t tell” made God send us a message (also here). It is a little unclear why God would warn us by randomly killing birds in Arkansas (there is no evidence that these were gay birds), but to a mind like Jacobs everything can mean whatever she wants it to mean. . . .

Right Wing Watch’s Cindy Jacobs file is also instructive, as are those at Secular News Daily. 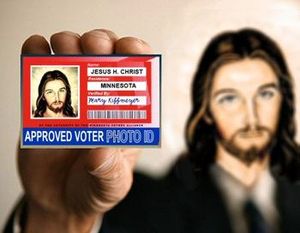 Until July 2012, Jacobs had a strong connection in Minnesota: her late sister Lucy Riethmiller ran a non-profit service organization, Life Resources Counseling Services, in Buffalo, as well as serving as the president of Deborah Company Midwest, which sponsored the 2009 convocation.

2012 caught her working hard to affect the outcome of the election, calling for half a million prayer warriors (through her United States Reformation Prayer Network (USRPN)) to make sure Republicans got elected by praying about it. One of the reasons they need to fight the current government is that, according to information that only USRPN subscribers have received, health care reform legislation apparently requires everyone to get an RFID chip implanted in their finger in order to receive health care. She has earlier prophecied that God is going to “sweep judicial activism” out of America’s courts, which is, I suppose, an example of a fractally wrong (http://rationalwiki.org/wiki/Fractal_wrongness) message. She also asked her followers to pray for the destruction of the separation of church and state. Here is Cindy Jacobs, being apparently dimly aware that some of her political suggestions may be controversial, trying to explain why even environmentalists are dominionists by rather feebly trying to redefine words.

In Minnesota (as Bluestem has reported in the past), the prayer focus for the “Government Mountain” was Voter ID:

1. Decree the mountain of the Lord will be exalted over the government mountain of Minnesota.
2. Decree God’s righteous government will flow into all cities and counties of Minnesota. (Isaiah 2:2)
3. Decree that law and justice will prevail at every polling place in Minnesota. (Deut. 32:4)
4. Decree that all corruption and illegal voting will be exposed.
5. Decree that believers will rise up, vote and choose God-fearing men and women of truth who hate unjust gain. (Ex. 18:21)
6. Decree to loose the bonds of tradition and generational politics so voters can choose freely.
7. Pray that believers in Minnesota understand their vote is a covenant act before God that declares their allegiance to the standards of the candidate, whether they be for God or against Him.
8. Pray at your polling places. Dismiss the spirits of corruption and confusion that have influenced the hearts and minds of the voters. Ask God to station angels there to protect the integrity of voting.
9. Pray for protection over the Voter ID Constitutional Amendment and that the people of Minnesota will have their voice heard. NOTE: The ACLU has filed a lawsuit challenging the voter ID constitutional amendment. Secretary of State Mark Ritchie opposes the law, so there is a question of whether he will defend it or not. There is also discussion that the legislature will not defend the case, alleging it will be too expensive.

Minnesota’s voters rejected the voter ID amendment, as well as handing control of both chambers of the state legislature to the DFL, after two years of Republican control. (For an overview of Seven Mountain Dominionism, click here; Minnesota’s Capitol Prayer Network, which Cathy Jo Severson once led, also espouses a Seven Mountain worldview).

Dan Severson had long made Voter ID and claims of electoral corruption a centerpiece of his political talking points. He was so appalled at the results of the 2012 elections that he threatened to move from the state.

The former Republican state representative and two-time statewide candidate watched election night as Fox News called the presidential race for Democratic President Barack Obama, and his mood got worse from there as an unexpected Democratic wave formed.

He did not understand.

“It’s immoral,” he said at the Minnesota Republican Party post-election gathering in a Bloomington hotel. “I’m in a state of disbelief. If that’s what Minnesota wants to do, I’m not a Minnesotan for long.” . . .

The 2009 intercession isn’t the only point where the Severson name surfaces in Minnesota’s prophetic community. According to the 2012 Generals International Minnesota Root 52 Prayer Guide:

“I WANT Minnesota to be a Cancer Free Zone”: March 25th, 2007 Minnesota is called to be a place of healing. God wants us in Minnesota and at Jubilee to steward healing virtues. I see a warehouse in heaven marked for the people of Minnesota. From that storehouse He will be giving us body parts and more. St. Cloud sits on the Mississippi and is located at the top of what is known as “Medical alley”. St. Cloud is on the northwestern end and Rochester is at the southeastern end of Medical Alley. St. Cloud’s destiny is to be a place of healing.

St. Cloud is on the Mississippi and in the strategic place to be impacted by that great outpouring. We need to position ourselves in faith to capture that revival as it is carried on down in the current of God. I see people coming here, Minnesota and Jubilee for healing. I see the map of Minn. Outstretched before me and people crossing over its borders and receiving their healing!

Heavens alone knows what building the Sandpiper oil pipeline in the Headwaters region might do to that vision of healing carried downsteam if there’s a leak, but something we doubt Seven Mountain Republicans in Minnesota will raise the issue.