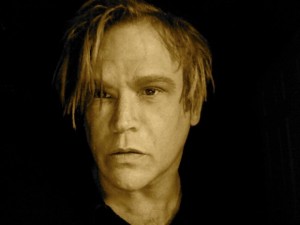 When I first met Mark Hooker, I thought “this is an interesting man.”  He was not “Minnesota Nice” but nonetheless, he was engaging.  The more I spent time with him the more I realized the complexity of his life.  Much like an onion that is allowed to caramelize with sauteing if you take the time, patience will pay off by bringing out the sweetness from the original offense.  Peeling away his many layers is like peeling an onion and it is well worth the effort.  Among Hooker’s many accomplishments, he is the founder and Artistic Director of Brazen Theatre.

He is an actor, director, playwright, and AIDS activist. Combining those talents is no doubt challenging.  But like many extremely talented people, he manages to find a work/life balance.  This is reflected in his art.  At a young age Mark left his family home and headed into NYC where he quickly found himself acting for such shows as One Life To Live, All My Children, and The Guiding Light. He reflected with me on how it was working for ABC saying he was one of the All My Children “Family” Then, jokingly, referred to this as “bullshit” stating “your only family until they don’t need you anymore.”

In attempts to create something more unique and authentic in theater experiences, he went through many stages of developing several theater companies

Brazen Theatre Company, established in 2010 as a community of artists dedicated to presenting innovative, relevant and provocative work that examines gay, lesbian, bisexual, transgender and the queer experience, was originally founded as Uncommon Theatre in 2004 (later Spiral Theatre) in Milwaukee by Hooker.

Mark says of the early days of Uncommon Theatre (and subsequently Spiral Theatre) that they grew out of need.  (He) “noticed that the only LGBTA-dedicated theatre companies in Milwaukee, Bialystock and Bloom and Theatre X were closing, leaving a creative and cultural gap.  As a theatre company, we championed the complexity and diversity — both historical and contemporary — of the community, presenting both classics and plays of pure entertainment.”

He is a member of Actors Equity Association, the Screen Actors Guild, and the American Federation of Television and Radio Artists (recently merged with SAG),

Having been active in the entertainment industry for over thirty years, he has served as the Artistic Director for Uncommon Theatre, as well as Spiral Theatre and now for Brazen.

On stage, Mark performed in Someone Who’ll Watch Over Me, Die Mommie Die where he received accolades in a review Julie McHale.

“Much of the humor derives from Hooker in drag as Angela Arden. His flamboyant outfits are a hoot as are his movements and facial expressions. He keeps us engaged, as does the unanswered question – what ever happened to Aunt Barbara??? With Bialystock and Theatre X gone, and Spiral on its way [to Minneapolis under the new name Brazen], where will we find offbeat theater in Milwaukee?”

He recently played Mr. Fayette in Clifford Odet’s Waiting For Lefty off-Broadway at the Nuance Theatre in Times Square.

Locally, at Theater in the Round for the 2014 Fringe Festival, Mark staged and directed The Miss Longview Texas Drag Pageant, which he wrote and directed, He premiered this work in New York City in December of 2013 to critical acclaim. Longview is currently being workshopped and being evaluated for the full length version on another stage in the Twin Cities and being looked at for possible adaptation for the screen.  Mark’s new musical, What Liza Saw, is presently in development.

Another upcoming Brazen Theatre production, Uncle Walt, is a black comedy by Andrew Rosdail.  Hooker directs this production and is looking forward to possibly using an experimental staging in the Brewhouse at the Schmidt Artist Lofts where he currently resides part time.

Mark’s directing accomplishments include Doubt, Butterflies Are Free, Naked Boys Singing (closed by the Milwaukee Vice Squad and later reopened!) amongst others in Wisconsin and Minnesota.

Mark says he is pleased to be back in Minneapolis after three years in New York City, where he studied the Meisner Acting Technique.

On a much more personal side, Mark has been living with AIDS since 1985. He discovered he had HIV when he received a letter from the New York State Department of Health telling him that he had possibly been infected by a tainted experimental hepatitis vaccine which was administered to him in 1980.  As a route of transmission that is no longer heard of in the United States.  This makes Mark a unique case that highlights the changes in the HIV and AIDS epidemic. Therefore, Mark is also one of the individuals that will be appearing in the upcoming book Face Off HIV (a project of TheColu.mn). 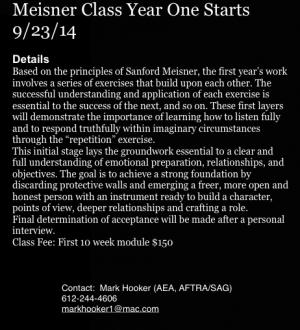 In addition to his art and acting Mark directs, produces and teaches.  He is holding an upcoming series of classes on the Meisner Acting Technique.  The classes will be held at the Schmidt Artist Lofts and will be very focused on helping each actor learn this technique.  Therefore, much attention will be given to each student in the form of direction and feedback. 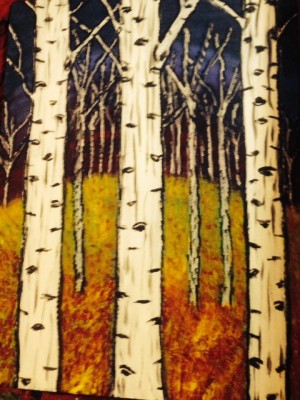 And if that ins’t enough, Mark is also a talented painter, and is participating in the St. Paul Art Crawl this October.

This year, his theme is Birch Trees.

His thoughts on Birches are “Their bark is fragile, and stripped, letting the world see them for the delicate creations that they are.”

Brazen Theater can be found, along with information about the upcoming class on Facebook.

The Importance of Being Earnest

Hooker states “Giving a twist to Oscar Wilde’s already intricate plot, we used gender-blind casting, filling the pivotal roles of both Aunt Augusta and Miss Prism with men Gay Broadway This musical revue included theatrical interpretations of Broadway tunes with GLBT-related themes, including a rendition of Hairspray’s “You’re Timeless to Me” sung by two men.”

This play explored the range of human emotions in the context of both mother-daughter and lesbian lover relationships seldom explored on the Milwaukee stage.

A striking gay update of Schnitzler’s 1897 play, “La Ronde”, Broadway playwright Jack Heifner’s play explores the range of gay (and human) interaction through a series of interconnected encounters played out sequentially on stage. A co-production of Uncommon Theatre and the Shamelessboyz Company from London.

“Towards the end of February, Spiral Theatre staged the single best romance of the year with “Butterflies Are Free”

“Spiral Theatre’s “Butterflies Are Free” elucidated the stereotypes we have regarding the handicapped. Sometimes the sighted are more blind than the blind.”
Wait Until Dark In an exploration of terror and bravery, this classic 1960s play focused on a blind heroine facing a trio of criminals and leveling the playing field by drawing them into her world.”

Needless to say, when Mark Hooker traveled to Minnesota to continue his work, we inherited a GEM!