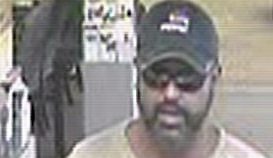 Authorities are continuing the search for Ty Hoffman who is the main suspect in the murder of LGBT community leader and Lush Food Bar owner Kelly Phillips.

At 2:01pm on Monday afternoon, Blaine police responded to a bank robbery at TCF Bank in Blaine. Police reviewed security camera footage and believe the man who robbed the bank is Ty Hoffman.

At 5am on Tuesday, police responded to a possible sighting of Hoffman at the Anoka County Airport. The search for him continued through Tuesday afternoon.

The search was concentrated around a wooded area new the airport

This appears to be the area SWAT is concentrating in search for Ty Hoffman @ Blaine airport. http://t.co/j5UH0FouDN

Hoffman is accused of shooting Phillips at a gas station in Arden Hills on Aug. 11. The two were former partners who opened Lush Food Bar in 2009. Last week, family and friends gathered at St. Mark’s Cathedral in downtown Minneapolis to remember Phillips. The community has raised $25,000 for information leading to the capture of Hoffman. To share any information or report a tip anonymously, call Crime Stoppers at 1-800-222-TIPS.