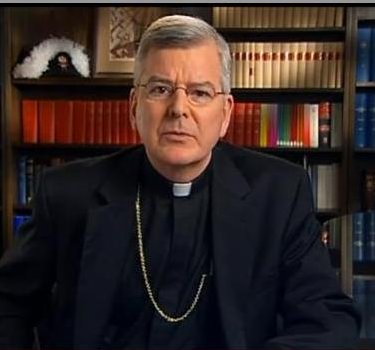 This weekend, Fox 9 released a 30-minute raw video of reporter Tom Lyden grilling Archbishop John Nienstedt about his views on homosexuality — views that Lyden pointed out are fraught with contradictions.
Lyden asked Nienstedt if he is “gay” or “homosexual,” and Nienstedt replied, “No, I’m not.”

Lyden, who is gay and has been with his partner for two decades continually asked Nienstedt to explain his — the the church’s — seemingly contradictory teachings on being gay, lesbian, or bisexual. While Lyden asked Nienstedt the questions, a woman in the background continually interrupted.

City Pages has a partial transcript of the exchange where Lyden asks, Does that seem reasonable to you, that we should all lead the lives of priests?… Tell me, archbishop, why should I lead the life of a priest?

Nienstedt responds: “Because it is of your nature to, um, express yourself sexually through a committed relationship.”

Lyden shot back, “I am. I’ve been with the same partner and husband now for 21 years.”

Lyden also questioned why Nienstedt and the church teach that sex should happen within marriage yet worked to deny marriage to same-sex couples:

N: We believe, correctly, that sexual relations take place within the context of a committed marriage relationship.

L: And yet the church is opposed to marriage and you fought gay marriage.

N: I didn’t fight gay marriage. I fought for marriage as a traditional understanding of a union between a man and a woman.