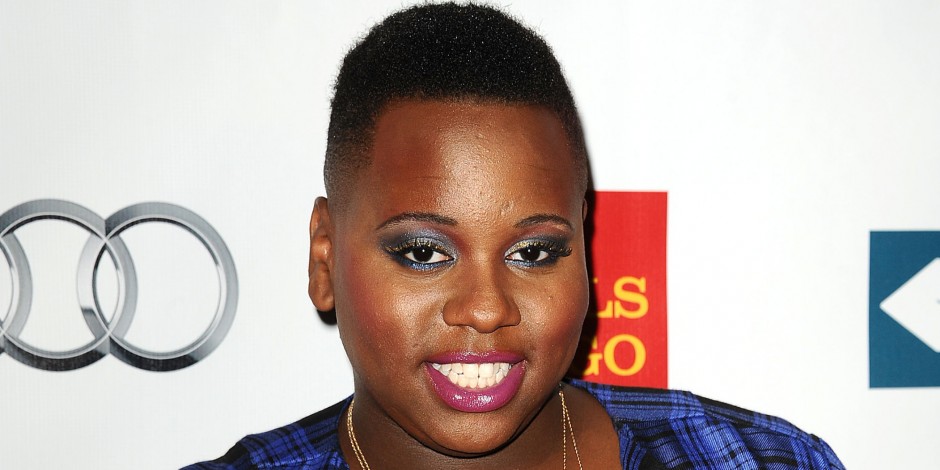 21-year-old Alex Newell describes himself as having been a “normal, run-of-the-mill high school student” before he landed a role on one of the most successful shows in television history. Newell, who will be performing tomorrow (Sunday, June 29th) at The Saloon’s Pride Block Party in Minneapolis, won the role of Wade “Unique” Adams on FOX’s Glee in the final round of the first season of Oxygen’s reality show The Glee Project.

Newell’s role on Glee propelled Newell from his Massachusetts high school into the spotlight; the actor-singer-dancer now finds himself in high demand for Pride gigs across the country and with two record deals, with Atlantic Records and Deep Well Records.

Newell dreamed of being a Broadway “triple threat”—a musical theater term that refers to someone’s astuteness in the three areas of singing, dancing, and acting—long before he signed his Glee contract. Attending a private Roman Catholic High School in Massachusetts, Newell was active in choir, improv club, and costume club. “I had to grow up really fast,” says Newell, who lost his father at the age of six. “It was just me and my mother,” he continues. “I had to grow up fast and learn who I was as a person.”

The slope of Newell’s developing musical theater career would soon take a sharp turn upwards, beginning with the day that his cousin sent him the link to an online casting call for a role on Glee. Newell submitted a video of himself singing the Dreamgirls hit “And I Am Telling You”; soon, he found himself on a flight to Los Angeles for a second round of auditions, having piqued the interest of the Glee team looking for new talent.

At the second round of auditions, he sang “River Deep, Mountain High,” a song featured in Glee’s second season. He would later receive an email inviting him to be a contestant on a new reality show that had evolved from the original open casting call—The Glee Project.

On The Glee Project, contestants were put through a rigorous “workshop,” as Newell describes it, that simulated the demands on being on Glee. There, he met “some of [his] best friends in the world,” as the group worked “long hours” and “strenuous day[s]” with each round of the competition, which entailed learning full musical and dance numbers to be performed for the cameras, following the real-life process of producing a Glee episode.

“You were actually getting the hands-on experience of what Glee is,” recalls Newell. “You get the singing, the dancing, the acting. . . not just the aspect of what it’s like, but [also] how it’s made and how it happens: working with the choreographer, going into the recording, getting a demo, learning the song from the demo. . . You can’t really call it a competition. It was a workshop, getting you acclimated to what Glee work is.” At the end of The Glee Project, Newell, a runner-up alongside Lindsay Pearce, won a two-episode arc on Glee. Newell made his Glee debut in the Season Three episode “Saturday Night Glee-Ver” as the character of Wade “Unique” Adams, a male-to-female transgender teen who begins expressing her female gender identity upon transferring to William McKinley High School, home of the ragtag group of high school singers and dancers that audiences have come to love. Newell’s Glee character elicited powerful reactions from many viewers—particularly his performance of Beyoncé’s “If I Were A Boy.”

“I think that’s the number one song that people come up to me and say, ‘Oh my goodness, I love “If I Were A Boy”—you made me cry,’” Newell says. “There was something about that number that was just so pivotal for the character.”

Newell’s stint on Glee evolved into more than two episodes, as Unique became a recurring character on the show’s third, fourth, and fifth seasons. Of Unique, Newell says he loves to bring a sense of “innocence and joy” to the character.

“I’m extremely shy most days, but I don’t lead on that I’m shy. . . I like to bring that coy shyness, and the innocence, to Unique.”

During his senior year of high school, Newell went back and forth between California and Massachusetts, alternating between Glee filming and working towards his diploma. “I was literally playing a balancing act,” he says. He affirms that playing double-duty as a high schooler on television and in reality was “smoother than what most people would think.” Despite the hours missed for Glee filming, Newell graduated high school before moving to Los Angeles to work full-time. “I kind of finished my high school career to close a chapter and open another one at the same time.”

Newell now resides in Los Angeles and continues to develop his music and musical theatre career. “Every day I’m learning,” he says. “I feel like I’m in college, learning everything that I would have been learning but actually experiencing it.” In response to getting a record deal with a company as renowned as Atlantic Records, “there’s nothing else [to do] but be very scared and nervous,” says Newell. “It’s a whirlwind. . . Everything moves so fast that you don’t have time to process it all.”

Nonetheless, Newell jumped at the opportunity; at the beginning of this month, he released his first single, a cover of Sigma’s “Nobody to Love,” a tune popularized by Kanye West who sampled Sigma’s track on last year’s Yeezus.

No doubt Newell will be performing “Nobody to Love” tomorrow night at The Saloon as a part of a show that will also feature the artists Natalia Kills, Pop Rocks, DJ Perez, and Camille Collins.

“I love going places and doing Prides,” says Newell, for whom Minneapolis is but one stop on a Pride performance tour. As he grew up under the care of his mother, turning to artists such as Whitney Houston for inspiration, Newell learned to simply be himself, advice he would give to any young person struggling with their own identity. “There are so many people in middle school and high school that will try to make you just like them because of their own insecurities,” says Newell. “You don’t have to try to pretend to be anyone else. People will come to you and like you for you.”

To Newell, “Pride is being proud of yourself—what did you do last week that made you proud? Are you okay with being yourself and out loud and proud about who you are?” Newell, an out gay man, says that Pride is about “how proud we are of where we’ve been [and] where we’re going.”