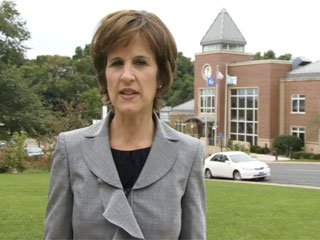 Democrat Matt Entenza filed a last-minute challenge to State Auditor Rebecca Otto. His reason, in part, was a vote she took in 2004 in favor of an anti-gay marriage amendment.

Entenza filed for the office just minutes before the deadline to file, and after the DFL convention where activists picked Otto. In a statement he released on Tuesday, Entenza said he was running because of rights for LGBT couples:

Two of the most important issues we’ve been fighting for have been the rights of LGBT couples to marry and the right of all Minnesotans to vote without extra burdens being placed on them. These are issues that I have always fought for and issues I have championed as the leader of the DFL House caucus.Currently we have an Auditor who as a Legislator voted to put a constitutional marriage ban to a popular vote and voted for Voter ID.

“She voted with Republicans to place a ban on marriage equality on the ballot,” Entenza said, according to Minnpost.

What Entenza said is true, but it doesn’t tell the whole story.

Otto represented a swing district close to one held by a then state senator Michele Bachmann who was pushing the amendment. According to the Wall Street Journal at the time, it’s a vote she appeared to regret almost immediately:

“I can’t believe you came to our fundraiser and said, ‘I’m on your side,’ ” chided Nadean Bishop, a lesbian and retired Baptist pastor, who carried with her a framed photograph of her wedding-like “Holy Union” celebration. At one point in the half-hour session, Ms. Otto teared up and asked for a tissue. “My vote would not have changed yesterday’s results,” Ms. Otto said, her eyes darting among her guests. “I need you to understand that.”

During the meeting, Ms. Otto suggested her vote didn’t necessarily mean she opposed gay marriage. All she wanted was a statewide debate on the matter, she told the group.

Like a majority of Americans, Otto had a change of heart, putting her up there with DFL heroes such as the late-James Oberstar and Paul Wellstone, both of whom vote for the Defense of Marriage Act while in Congress.

In 2006, Otto spoke with City Pages about that vote and that she regrets it.

“It would be a different vote because people felt very hurt by my vote and I never meant to hurt anybody. And I actually publicly announced before my election that year in 2004 that I regretted it publicly. It may have cost me the election, but I regretted it.

Since then Otto says she has not only regretted that vote but has lent her name to the cause of marriage equality.

In 2012, Otto toured with the “Vote No” campaign against the amendment.

In 2013, she stood with marriage equality supporters while the state Senate debated legislation.

On Wednesday, Otto supporters took to Twitter to demonstrate her support for LGBT equality.

.@RebeccaOtto at the Capitol celebrating the passage of marriage equality for all Minnesotans. pic.twitter.com/Db0rifLpo9

Otto shared a picture of the cake she and her husband cut at a fundraising event against the amendment, and another showing her marching with the Stonewall DFL.

On WCCO Radio on Wednesday, Otto responded to Entenza’s attacks.
Host John Williams asked, “What about that marriage vote when you were in the legislature?”

Otto replied, “Oh my gosh. That was back in 2003 and that issue has evolved and I apologized for it and said it was the worst mistake I ever made. I was in a very conservative area but I have worked extraordinarily hard to make sure we have
marriage equality in this state… I have very strong backing from the LGBT community as well they know what a great ally I am and that I raised money to defeat that [anti-gay marriage amendment]”

Activists have also launched a petition asking him to withdraw.

For his part, Matt Entenza was an early backer of marriage equality when in the Legislature. He’s picked up the support of Rep. Keith Ellison, who has served as the co-chair and then the vice chair of the House LGBT Equality Caucus.