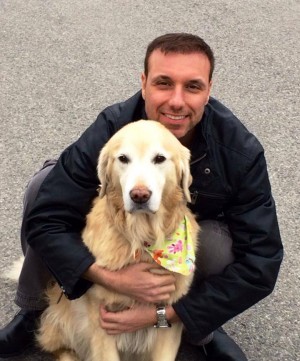 Tell us about your form of art, performance or work.
Over the years, Eric Casaccio has been involved in several different areas of the entertainment industry.  He got his start performing in Boston Regional Theatre Productions and independent films. During that time, Casaccio worked for Boston Casting recruiting talent for commercials, industrials, theater productions, and independent films while taking crew positions on local movies.  In January of 1997, Casaccio moved to Los Angeles to pursue acting and writing and subsequently wrote his first feature screenplay “David’s Walls”.  After completing several drafts, he became determined to bring his creation to life.  Combining his experiences in production and casting, Casaccio produced a five-minute experimental music video for “David’s Walls” offering viewers a brief symbolic vision of the story with abstract glimpses of the main characters.  “David’s Walls” screened in several festivals around the country.  Casaccio’s most important accomplishment is “Psychic Glitter”, an onstage charity event production responsible for raising $1978.20 for The Trevor Project honoring the memory of Lawrence King, a teenager shot and killed in school for his sexual orientation and gender expression.  Casaccio wrote, produced, co-directed, and even played a feature length lead role while spreading awareness for an unforgettable tragedy.

Where and how can the general public view, participate in, or purchase your work?
Recently, Casaccio’s short film “Freak” (www.freakthefilm.com) collected sixteen awards and one nomination on the film festival circuit and reached critical acclaim.  This story of self acceptance touched mainstream, international, underground, and LGBT audiences all around the world with several positive reviews. “Freak” received worldwide on-demand distribution IndieFlix.

In addition to studying abroad with the London Theatre Program, Eric received his Bachelors Degree from Roger Williams University graduating with honors. He has studied acting at the Michael Chekhov Connection and has appeared in several award winning short films as a member of SAG/AFTRA.   “Life is about being in the moment, and the moment is all you have”

Tell us a little about your inspiration. What inspires you?
True, honest, authentic loving Individuals that know how to stand on their own and not care what others think.

Tell us about one piece, work, or performance about which you are particularly proud?
I’m proud and grateful for each artistic accomplishment. If I had to choose one, I would have to say “Freak”. It was a simple yet effective project that out of nowhere just exploded winning seventeen awards, reached critical acclaim and touched LGBT, International, Mainstream and Underground audiences all around the world.

Anything else you’d like to share with us?
Just be who you are no matter where you are and remember, life is about living in the moment, and the moment is all you have! Enjoy it! xoxo