Home Arts So much gold, so many gems, and the #1 cat in America 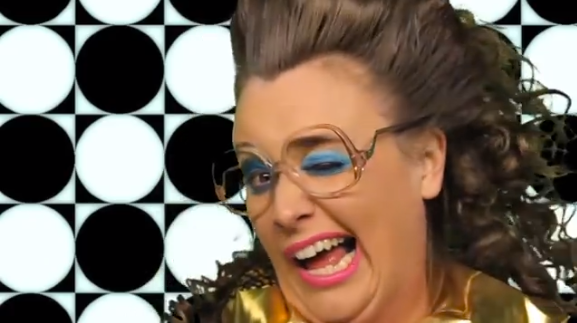 Leslie and the Lys, Boone County Comedy Troupe, and Dean and the Delilahs brought their brand of wacky humor and catchy beats to the Triple Rock Social Club on Friday night.

If you haven’t been introduced to Leslie Hall, here’s what you need to know: She has a healthy figure which is wrapped in gold spandex while she sings about her cat, her pants, and crafting to a dance and hip hop beats. She hosts a gem sweater authentication ceremony for one lucky fan each show. She is, after all, the keeper of the world’s largest collection of gem sweaters. She’s got a rabid gay and lesbian fan base and has personified a new, modern versions of camp entertainment.

She tours with her friends Ramona Muse of Ramona and the Swimsuits, and Ramona’s boyfriend Derek Lambert of Dean and the Delilahs.

The show at the very crowded Triple Rock on Friday night kicked off with Leslie and Ramona performing as Boone County Comedy Troupe. They gave their take on the six types of comedy. The duo, along with Derek on a purposefully ill-timed sound effects machine, had seasoned Leslie Hall fans in stitches and newcomers wondering what the hell was going on. They ran through the types of comedy — celebrity impersonations, current events, etc. — performing poorly and constantly breaking but that’s the schtick and it worked.

If you want a taste of how ridiculously hilarious the Boone County Comedy Troupe is, you can listen to some at the group’s website. Trust me, its hard to convey, so give it a listen.

Dean and the Delilahs then brought some campy folk-country to the evening. Dean (Derek) was wearing a denim shirt to go with tight floral-print pajama bottoms lending some quirkiness to what was all around entertaining music.

Here’s some Dean and Delilahs flavor:

Leslie and the Lys then kicked off the gem-sweater hip hop party with a series of her best hits such as Tight Pants/Body Rolls:

And some of the new hits such as No Pants Policy:

The #1 Cat in America featured the stage transforming into a giant replica of her cat which she had plenty of conversations with (the giant cat talked back).

Vikings fans don purple jerseys, Jimmy Buffett fans like their floral print shirts. Leslie fans buy, make or steal gem sweaters. Before the show, Leslie and the gang scan the crowd to identify the fans who brought the best gem sweater. They are hauled onstage and Leslie rates them, picks a winner, and signs a certificate of authentification. That gem sweater is now official.

After the show, the event turned into a dance party for the crowd with the performers joining in.

It’s hard to imagine a campy Iowan in gold spandex making a career of singing about gem sweaters, cats, and body rolls, but she has. She got her start in 2005 as an internet sensation (hence her third album title ceWEBrity). Hall and the gang have been touring for years, and this visit to Minneapolis — my third show — was more entertaining than the last. She’s been a popular guest on the hit children’s show Yo Gabba Gabba.

She’s become such an icon for gay and lesbian fans that she’s started marrying them. One such wedding has even taken the form of a documentary called Married in Spandex. The couple, lesbians from Philadelphia, traveled to Iowa with their friends and family to get married in gold spandex and gems — and have Leslie and the Lys perform the ceremony. The film explores the reaction of friends and family to the gold spandex celebrant. She even converts some new fans.

Next time she’s in town, I strongly recommend checking out her show. You’ll laugh while you dance, and how often does that happen?