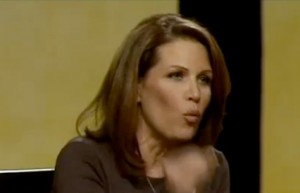 Rep. Michele Bachmann may be leaving her seat in Congress at the end of the year, but she continues her tradition of demonizing the LGBT community.

“There’s nothing about gays in there, but the gay community decided to make this their measure,” Bachmann said. “And the thing that I think is getting a little tiresome is the gay community thinks that they have so bullied the American people and they have so intimidated the politicians that politicians fear them and they think they get to dictate the agenda everywhere. Well, not with the Constitution you don’t.”

While Bachmann is correct that there wasn’t any specific reference to “gays” in the bill, the bill was crafted by two anti-LGBT groups, the Center for Arizona Policy and the Alliance Defending Freedom, both at one time affiliated with Focus on the Family. The bill’s sponsor had even stated that he introduced it because of a case in New Mexico where a same-sex couple sued a wedding photographer for discrimination and won.

Larson asked Bachmann, “Can we talk a bit about Arizona? I liked your comments on Jan Brewer. Here’s the thing: I don’t know why anyone would reject the idea of religious liberty and letting people follow their beliefs.”

Bachmann replied: “Well the Democrats in Congress didn’t because it’s essentially the same bill that passed through Congress at the federal level. It was unanimous out of the House every Democrat voted for it, 97-3 in the Senate and President Bill Clinton signed it, so apparently it wasn’t bigotry when a Democrat [sic] president signed it, but now it is. And this bill doesn’t talk about Christianity or about homosexuality. This is about religious liberty.”

Bachmann was referring to the Religious Freedom Restoration Act of 1993 which was passed by Congress mainly to protect religious traditions from being trampled on by government action. The main impetus for the law was the criminalization of many Native American traditions including peyote use. In fact, the 1993 law mentions an important case regarding peyote use.

After Congress passed the RFRA many states did as well, including Arizona. Conservative lawmakers in Arizona (and several other states), after the New Mexico decision regarding discrimination against a same-sex couple, decided to amend the RFRA to include businesses in the public square to a law that only pertained to religious institutions.

Bachmann continued, “Our first amendment right to religious speech and expression is not for sale. I don’t care what the NFL threatens. I don’t care what the super bowl threatens. Our religious liberties aren’t for sale. That’s what was on the chopping block here. It’s that serious because we want to hear about tolerance but it’s convenient that tolerance is like a one-way street. Tolerance is a two way street and the beauty of america is I can worship the way I want to but you don’t have the right to force me to conform to your view and thats what this bill was. it’s government enforced conformity with whatever the government decides.That is the opposite of America.”

Right Wing Watch, a project of People for the American Way, has been documenting much of the anti-LGBT sentiment at CPAC where Bachmann made her statements.