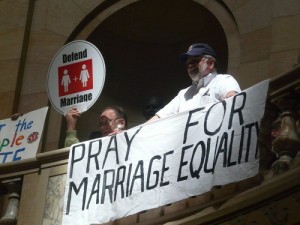 Fifteen states (and the District of Columbia) have filed a brief in support of marriage equality in Utah and Oklahoma. Absent from the list is Minnesota.

Minnesota stands out as one of only three states which have not signed on to the brief, according to Buzzfeed. New Jersey, which has a Republican attorney general, did not sign on. Hawaii’s attorney general told Buzzfeed that the state was waiting for a decision from the 9th Circuit before adding its name.

A fifteenth state, Oregon, which doesn’t have marriage equality, also signed on.

When Minnesota was facing a marriage equality lawsuit, activists urged Minnesota Attorney General Lori Swanson to drop her defense of the state’s unequal marriage laws. She was unresponsive.

Minnesota eventually passed marriage equality into law in May 2013, making the lawsuit moot.